It feels like it has been forever since I have written anything.  2017 has been a year filled with a flurry of activity, which has distracted me from writing much.  But where do I even begin.  God has grown me up in so many ways in this past year.  It was a year ago that we launched the counseling ministry as I completed my Masters at Liberty U.

A month ago, today, I finally finished and graduated.  During this time, I have had the opportunity to work with a number of people from a variety of backgrounds, with all differing stories and circumstances.  The only way to truly learn is to get right into the fray sometimes.

The fruit of this experience has been substantial.  When starting out, I constantly questioned myself.  How could God use someone like me to work with people and help to set people free?  Who am I? 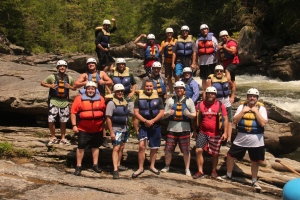 You heard me right.  Within 1 year of this idea being brought about over breakfast, we have now held 2 of these weekends.  The results? Wow!!!!  I’ve seen God work in the hearts of men in so many wonderful ways.  35 men have now gone through this Boot Camp. The transformation and restoration that has taken place in the hearts of many of these men has been remarkable.  None more so than what I saw take place this past weekend.

The fruit of that is seeing how men begin to take what they went through and move back into their world.  For me, the first such encounter changed my life forever.  For some it does and for some doesn’t.  It has been been so awesome to see just how different men have become and what it has meant for their families as well. Is this the case for all of them?  No, of course not.  It’s a journey that only a few will truly elect to embark on.  I have seen the few that have so far.  Men choosing to step out as men and as warriors for the Kingdom.  Men willing to risk following God into the unknown under the apprenticeship of Jesus Christ.

So all of this has happened and the question still often remains, who am I ?  What did I do to deserve to be called into such a position, go after the hearts of men?  The answer to that question is fairly simple, as I continue to realize and remind myself of.  I did nothing.  I did nothing except choose to give God my ‘yes’ and risk following Him into the unknown.  I’m constantly reminded of the people God used throughout Scripture and the disciples that walked with Jesus and the apostles following His ascension. All were people that, by the world’s standards, were not worthy or a bunch of ragamuffins kids that were clueless when they first chose to follow Jesus, and the list goes on and on.

So what does that mean.  What is God up to in all of this?  I can say that in the midst of this all, He continues to grow me up.  Through counseling and through the Boot Camps, I have been tested with new challenges, which along the way, God has reminded of one key thing.  “Son, you are not in control.”  Woah!!!  That has been a huge wake-up call and with each turn, He reminds me again.

So I move into the last months of 2017 with a sense of hope and excitement.  I still don’t know what is coming next and you what, I’m beginning to like it that way.  I’m beginning to like more and more seeing what God will be up to next.  It’s not about me anyway.  This is His story we’re living in.  2017 has been such a blessing.  It’s been exhausting at the same time, but has been well worth it every step of the way.